What are Error Codes? Open or Close

“504” – Session key re-initiation required due to expiry or key out of sync.

“505” – Synchronized Key usage not allowed for the AUA.

“542” – AUA not authorized for ASA. This error will be returned if AUA and ASA do not have linking in the portal.

“543” – Sub-AUA not associated with “AUA”. This error will be returned if Sub-AUA specified in “sa” attribute is not added as “Sub-AUA” in portal.

“553” – Registered devices currently not supported. This feature is being implemented in a phased manner.

“555” – rdsId is invalid and not part of certification registry.

“556” – rdsVer is invalid and not part of certification registry.

“557” – dpId is invalid and not part of certification registry.

“561” – Request expired (“Pid->ts” value is older than N hours where N is a configured threshold in authentication server).

“569” – Digital signature verification failed (means that authentication request XML was modified after it was signed).

“570” – Invalid key info in digital signature (this means that certificate used for signing the authentication request is not valid – it is either expired, or does not belong to the AUA or is not created by a well-known Certification Authority).

“581” – Fuzzy matching usage not allowed as per license.

“582” – Local language usage not allowed as per license.

“586” – FID usage not allowed as per license. This feature is being implemented in a phased manner.

“588” – Registered device not allowed as per license.

“811” – Missing biometric data in CIDR for the given Aadhaar number.

“901” – No authentication data found in the request (this corresponds to a scenario wherein none of the auth data – Demo, Pv, or Bios – is present).

“902” – Invalid “dob” value in the “Pi” element (this corresponds to a scenarios wherein “dob” attribute is not of the format “YYYY” or “YYYYMM-DD”, or the age is not in valid range).

“913” – Both “Pa” and “Pfa” are present in the authentication request (Pa and Pfa are mutually exclusive).

“930 to 939” – Technical error that are internal to authentication server.

“996” – Aadhaar cancelled (Aadhaar is no in authenticable status).

“997” – Aadhaar suspended (Aadhaar is not in authenticatable status).

What are the UIDAI services? Open or Close

Below are the UIDAI services which are used by Aadhaar number holder to perform Aadhaar Authentication:

What is Auth Modality? Open or Close

UIDAI provides authentication facility with different modes such as demographic, biometric (fingerprint or iris) or One Time Password (OTP). Auth Modality shows the mode of authentication used to perform that specific authentication transaction.

What is AUA Transaction ID in the authentication records? Open or Close

If I have not performed some of the transactions listed in the records, what should I do? Open or Close

If the listed authentication transaction is not performed by the Aadhaar number holder, resident may contact the respective Authentication User Agency (AUA) for further details.

This facility allows me to view maximum 50 authentication records. How can I check more records? Open or Close

Aadhaar number holder can view details of all authentication records performed by any Authentication User Agency (AUA) or by him/her in the last 6 months. However, maximum of 50 records can be viewed at one point of time.

Some of authentication transactions records are showing as failed, what should I do? Open or Close

For how much time period I can check my Authentication transaction records? Open or Close

Secure QR Code Reader (beta)
Why is it needed for our QR Code Client? Open or Close

Comparing HASH will ensure that the client that has been downloaded is the one that was provided by UIDAI. UIDAI will provide SHA-1 and SHA-256 for verification.

What are the benefits of Hashing? Open or Close

One main use of hashing is to compare two files for equality. Without opening two document files to compare them word-for-word, the calculated hash values of these files will allow the owner to know immediately if they are different.

In some situations, an encrypted file may be designed to never change the file size nor the last modification date and time (for example, virtual drive container files). In such cases, it would be impossible to tell at a glance if two similar files are different or not, but the hash values would easily tell these files apart if they are different.

The new digitally signed QR code can be read ONLY using UIDAI’s windows based application and validate it against UIDAI digital signatures. can be downloaded from uidai.gov.in. Moreover, a good quality QR scanner will be required.

Important: It is recommended to print e-Aadhaar having this secure QR code using LaserJet printer only.

What is Hashing? Open or Close

Hashing is an algorithm that calculates a fixed-size bit string value from a file. A file basically contains blocks of data. Hashing transforms this data into a far shorter fixed-length value or key which represents the original string. The hash value can be considered the distilled summary of everything within that file.

A good hashing algorithm would exhibit a property called the avalanche effect, where the resulting hash output would change significantly or entirely even when a single bit or byte of data within a file is changed. A hash function that does not do this is considered to have poor randomization, which would be easy to break by hackers.

Who all can use secure QR code of e-Aadhaar? Open or Close

Anyone, whether a Aadhaar Holder or an User/Service Agencies like Banks, AUAs, KUAs etc can use this facility for offline verification of the data in e-Aadhaar.

Note:- On 20th February 2018 new QR Code was implemented on e-Aadhaar and the QR Code reader client is available on uidai.gov.in from 27th March 2018.

How QR Scanner and UIDAI Application will work? Open or Close

Post installation of UIDAI’s QR code reader application, secure QR code of e-Aadhaar need to be scanned using the physical scanner in line with UIDAI Specifications. The application will display the demographic details of resident once the QR Code of e-Aadhaar is digitally verified by UIDAI at backend and give scan QR Code verified. In case the digital signature is not verified the reader displays QR Code not verified GUI Screen.

What information does new Secure QR Code of e-Aadhaar contain? Open or Close

What is UIDAI Secure QR Code? How QR Code enhance the security of e-Aadhaar? Open or Close

UIDAI e-Aadhaar letter contains a QR code. UIDAI has replaced existing QR code, on e-Aadhaar, having Resident’s demographic details with a secured QR Code which contains demographics along with photograph of the Aadhaar holder. There will be two QR Codes – Small one on front side of cutaway portion with demographic data only; and a large one on top portion of front side and rear side of cutaway portion, with demographic data and photo. Further, to make this Information more secured and tamper-proof, it will be signed with UIDAI digital signature. This new digitally signed QR code can be read ONLY using UIDAI’s windows based Custom client for desktops/laptops and validate it against UIDAI digital signatures in real time. Therefore, any fraud attempted on e-Aadhaar can be easily detected by using QR Code scanner.

The new digitally signed QR code can be read ONLY using UIDAI’s windows based application and validate it against UIDAI digital signatures. Application can be downloaded from uidai.gov.in. Moreover, a good quality QR scanner will be required. 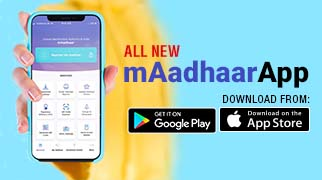